We went to Kew Gardens yesterday. Kew is a botanical garden in southwest London, about 120 hectares (300 acres) and is one of the world’s most important repository of plant specimens.

The sun was shining – Ah, a glorious day, but not for photography. The line is simply too harsh and contrasty.

This is the temple of Bellona, a tiny building by one of the entrances. During a recent renovation the staff discovered that the building, which was erected in 1760, is made of wood. Pretty good going for a wooden building open to the elements and un-lived in and therefore unheated.

Bellona is the ancient counterpart to Mars, the god of war. There was, apparently, a temple to the goddess of peace at Kew, but it hasn’t survived. Ironic, eh?

The photo was a pig to process, with the highlights and shadows. 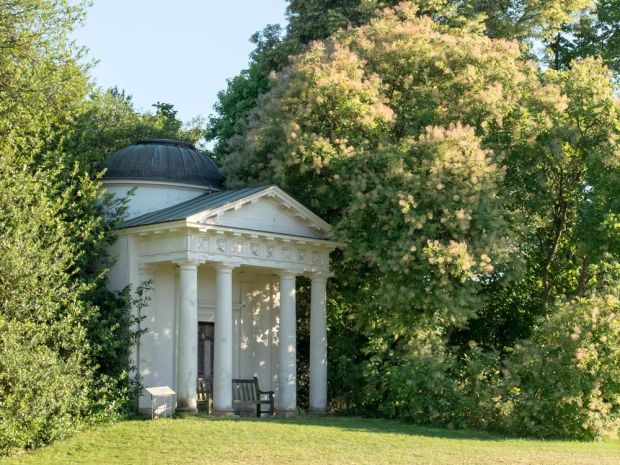 The tree to the right of the temple as you look at it is an American Smokewood, a rare tree native to Oklahoma, Texas, Arkansas, Missouri, Alabama and Tennessee. Wikipedia says it is in danger of becoming extinct in the wild.

We went to the lily house, at Tamara’s suggestion. Good choice. The light was still hugely contrasty though, and the Nymphaea ‘Kew’s Stowaway Blues’ was out in the middle of the pont. I had my fixed 35mm-equivalent lens Fuji with me, so this little crop is what I managed to get. The flowers were just magnificent.

On the way back, a signal failure stopped the Underground train line that would have taken us back into central London for the journey back to Cambridge. People told us it was common on the District line (one of the oldest lines in the London tube system), and not helped by the heat.

BBC news reported that trains are being cancelled and delayed all over because of the heat.