Jillian from Jills Scene wondered whether I would do some how-to posts on photography basics like aperture settings, exposure, shutter speed, and how to get the best out of a zoom lens.

So here is the first of the how-tos – and it’s all about apertures.

Lenses, Apertures, Irises, Blades, and everything else

Built into a lens is a set of overlapping blades that can be opened up or closed down to make the ‘hole’ or iris in the middle of the lens bigger or smaller. 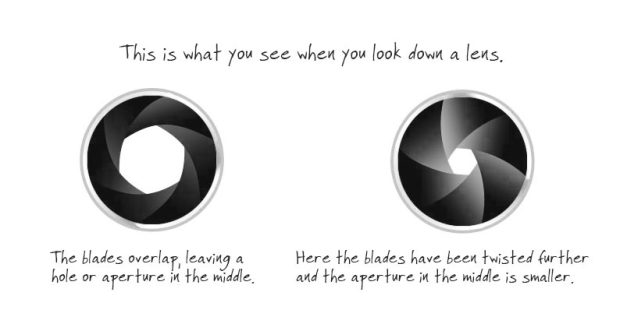 Even in the earliest days of photography, camera makers had worked out a simple way for photographers to be able to change the aperture in the lens.

The photographer would make the aperture bigger or smaller by twisting a ring on the outside of the lens. Twist one way to make the blades open up so the aperture gets bigger and twist the other way to make it smaller.

And it is such a good system that it is still used today.

True, the lenses in many modern cameras are powered by tiny motors so the photographer can just press a button to change the aperture electro-mechanically.

But it’s still the same principle – move the blades in or out to make iris in the lens bigger or smaller to let more or less light in.

By the way, one thing that separates a good lens from a so-so one is how many blades there are in it.

More blades means the more nearly circular the aperture is – and that means the clearer the image is that is focussed onto the film or digital sensor.

Imagine a lens with just three blades. The aperture would be like a curved triangle and light would spill and scatter and reflect off the edges of the blades.

You look at a scene and press the shutter. The shutter opens and lets the light through the lens and captures the scene on a piece of film or a digital sensor in the camera.

To get the exposure right, the camera needs just enough light and not too much for the scene being photographed.

Exposure is a combination of the size of the aperture and shutter speed. You can adjust the shutter speed and aperture by making one bigger and the other one smaller and it will give the same exposure.

And that leads to the next clever thing about lens design that’s been around almost since the beginning of photography, and that’s f-stops.

If the blades on a lens opened and closed continuously with no intervals, then photographers would have no indication of how much more open or closed a lens was as they turned the dial.

Here’s an example. Let’s say the lens is wide open at its maximum aperture. And let’s say it has six ‘clicks’ to get to its minimum aperture.

The question is, when and why do photographers want to use these different combinations of shutter speed and aperture.

That deservers a post of its own to fully explain, but let’s just highlight a few of the more obvious facts.

In low light, photographers need every bit of light entering the lens that they can get, so that means a large aperture.

Of course, they could choose a slower shutter speed, but maybe there isn’t a slow enough shutter speed in the camera. And there’s another problem, which is that with a slow shutter speed there is more risk of a blurred image because of camera shake.

Camera shake just means that the photographer can’t hold the camera steady while the shutter is open.

And in bright light there might simply be too much light entering the lens if it is at maximum aperture.