Leeds, West Yorkshire, England, is 52 degrees north of the equator and on the eastern side of the Pennine mountain range that snakes down Britain. It is February 7th 2008 and the daffodils in the grounds of a church that stands in the centre of Leeds, are out.

There was a time I would have thought to myself that the daffodils are out early, and enjoyed them. But those days are past. Now I think also of the long chain of consequences for the balance of the ecosystem that may result from the early warm days, long before Spring.

The heads were blowing about in the chill wind, which accounts for the blur. Well, that and me bending over and swaying about to get the shot.

I had the camera set at ‘Auto ISO’ in the range 64 – 200 ISO. And look what a lovely ISO the camera chose for the lighting conditions: 117 ISO. Who ever heard of such a thing! Ah, this modern world with all its gadgets. 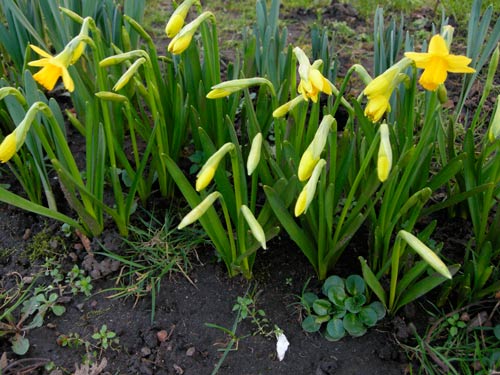 1 reply on “Ranting over daffodils”

[…] I got a prompt from WP to use ‘daffodils’ as a tag just now while drafting this. So I searched for the tag and found a post from February 2008 when the daffodils were out in Leeds. […]