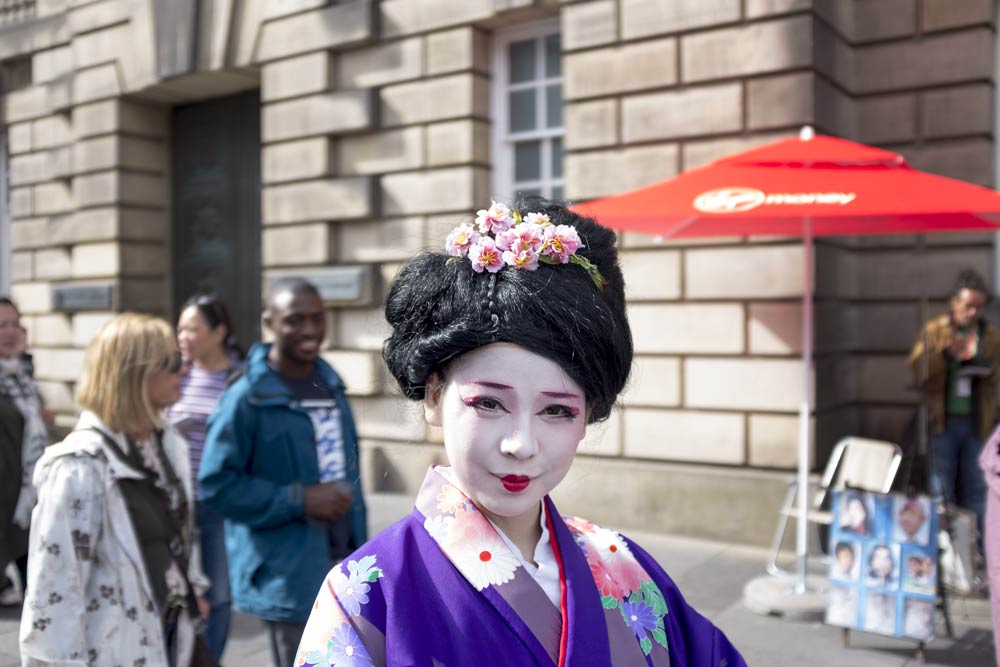 There is an argument going the rounds to the effect that we have reached more or less the megapixel count and image quality we need and there is not much point in anything bigger.

I want to use this article to disagree with that argument.

I took the photo above on Sunday, 3 August 2014 on the Royal Mile in Edinburgh during the Fringe Festival.

The EXIF data associated with the file tells me I shot it at 1/1,000 second at f2.0. The Fuji X100s camera that I used has a fixed lens with a maximum aperture of f2.0. In other words, I shot it ‘wide open’ with the minimum depth of field the camera is capable of.

That said, it is nicely in focus and pretty sharp.

This second image is a crop of about 10% of the area of the full frame of the original capture. 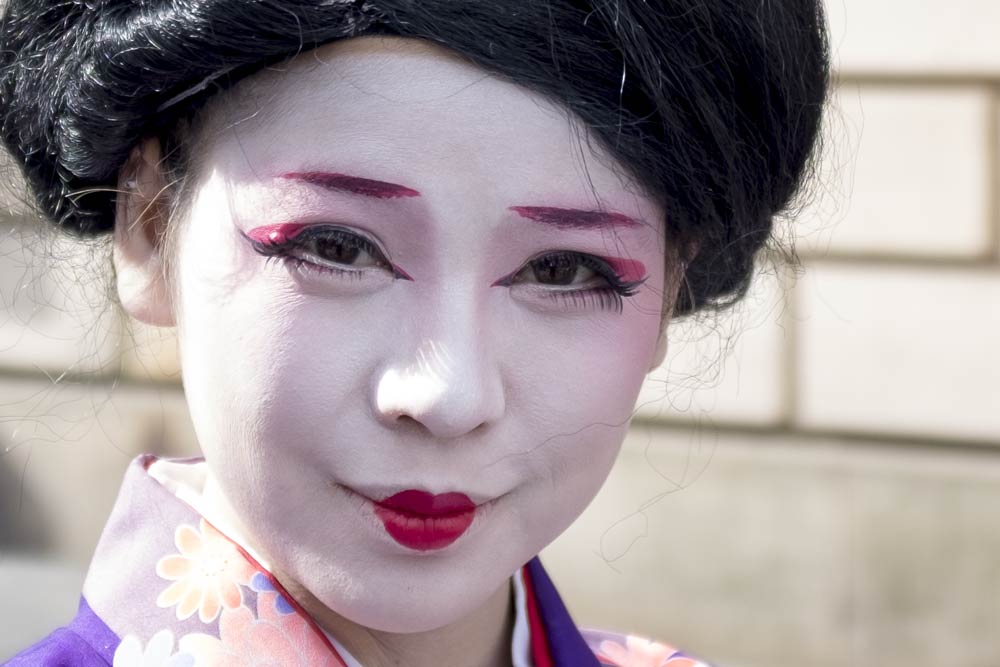 Cropping like this works well for the screen but it’s questionable whether it is going to give me a file that is good enough to print at large size.

Now, here next is a crop of less than half a percent of the area of the full frame. You can recognise the eye, but you can see that the image is starting to break up. You can begin to see the digital bits and shapes that make up the image.

And finally, here is a crop of a small area of the kimono.

It is less than one tenth of one percent of the total area of the full frame. I upsized it so that it fits the screen – and as you can see, the image has fallen apart.

And again, this is a representation for the screen at 72px. Pump that up to the 300dpi size needed for print – and the image would be even less clear.

[ If you are unclear about why sizing for the computer screen and for print are different, read this article on Uploading Images and Files Sizes ]

All other things being equal, there is a move towards smaller and lighter cameras. Professional photographers are moving to Fuji, Olympus, Panasonic, and Sony mirrorless cameras. Amateurs are doing the same.

The argument is simple. Why carry around a huge dSLR if a mirrorless camera will do the trick?

Go on to YouTube, go read articles online, and you will see endless comparisons.

You will read that mirrorless cameras are not as good at focus acquisition for tracking fast-moving objects as dSLRs. Or maybe they are, or are getting there and in a few more iterations of mirrorless models they will be as good as dSLRs.

In fact, one model that Olympus makes is considered to be very fast indeed at acquiring focus in difficult situations.

You will also read that colour fidelity of mirrorless cameras is as good or better. The way cameras handle greens varies between camera brands. I love the greens that Fuji produces, and I like it better than the way Nikon handles greens. This is another shot from a Fuji X100s.

You will read that the battery life of mirrorless cameras is worse that for dSLRs. The counter-argument is that an extra battery weighs a lot less than heavy dSLR bodies and the monster lenses that dSLRs need to accomplish the same thing that little mirrorless cameras can do.

So if you believe that, then everyone wants a smaller, lighter camera rather than a bigger, heavier one – all things being equal. Of course, things are not equal.

Nikon and Canon cameras and lenses are the outcome of years of iteration and improvement.

Top-end models from Nikon and Canon are wonder machines that can crank out perfectly focused shots at an image quality that was only dreamed of a few short years ago.

Fuji may have been in the sensor output and colour business for years but they are comparative newcomers to camera bodies and lenses.

Sony have been making cameras for longer, but they have taken a few wrong turns and the models that are winning accolades are quite recent.

Olympus and and Panasonic have invested in micro four-thirds, a smaller sensor size that cannot match larger sensors at higher ISO. And while Olympus have nailed colour beautifully, there are question marks over Panasonic.

So dSLRs are still a force in the camera market, but their share is shrinking and the reasons for that are weight and size.

The problem with dSLRs is not just the weight of the bodies but also the huge lenses stuck on them. Those huge lenses have the long focal lengths needed to capture distant objects – runners on the track, wildebeest on the plain, birds flitting from branch to branch.

And for those photographers who use zoom lenses to be able to capture both near and far objects, well everyone knows that when it comes to critical image quality, zoom lenses are simply less capable than primes. The faults usually show up at either end of the zoom range, with the sweet spot being at around normal focal length, which is 45 to 50mm.

Maybe now is a good time to describe the difference between mirrorless and dSLR cameras.

SLRs are called ‘single lens reflex’ cameras because when you look through the viewfinder you are looking via a series of prisms and mirrors, right out through the lens.

That is, you look into the viewfinder about half an inch or so above the lens but the light comes into your eye as though you were looking directly through the lens.

And the advantage of that is that there are no parallax errors. What you see is what the camera sees.

SLRs are called ‘reflex’ cameras because the mirror that diverts the light that enters the lens flips up out of the way for a fraction of a second when you take a shot (to let light onto the sensor) and then back again.

And when the mirror flips out of the way, you can no longer see through the lens, so the scene goes black for a moment. How long that moment is depends on how fast the camera shutter fires.

SLRs have optical viewfinders, whereas for the most part, mirrorless cameras do not. What you see in the viewfinder is a digital representation of the image the camera can see. The camera reads the information off the sensor and passes it to the viewfinder.

It is the same as what happens when you look at the LCD on the back of a compact camera or the camera on your phone.

Mirrorless cameras used to have slow refresh rates so that the image in the viewfinder looked poor. But now, they are so much better than some photographers prefer them to optical viewfinders.

The thing is that because optical viewfinders are not directly behind the lens (which they are in dSLRs) they have a parallax problem.

Because the viewfinder is slightly to one side of what the camera sees, you see the scene from a slightly different vantage point.

You can test that yourself by holding your finger in front of your eye and then moving your eye half an inch to one side. That is parallax.

Fuji recognised though that some photographers don’t want to give up optical viewfinders entirely, which is why there is the dual option on the X100 series (and on the X-Pro series).

Back To The Size and Weight Comparison

Now let’s get back to the comparison between the sizes of mirrorless and dSLR cameras.

The big advantage of mirrorless cameras is that they don’t have the dSLR’sprism and mirror box arrangement. Without that, they can be made smaller and lighter.

Also, without the mirror box that dSLRs need, the lenses can be placed nearer the sensor and therefore be made smaller.

That’s one more example of the trade-off in photography when the photographer wants an optical viewfinder that sits directly behind the lens so he doesn’t get the parallax problem, but has to put up with bigger, heavier lenses as a result.

I used a Fuji X100s camera to take the photo of the woman dressed in a kimono. It is a mirrorless camera and it has a fixed 35mm-equivalent lens.

As you can see from the comparison image here below that the lens on the Fuji, (the camera on the left), doesn’t stick out very much at all. At first glance you may wonder whether there is a lens attached at all.

The camera to the right of it is a Nikon D7000. That’s just the body, without a lens attached. How far a Nikon lens sticks out depends on which lens is attached, of course. A 35mm lens sticks out about two inches. A telephoto lens might stick out twelve inches.

As I mentioned earlier, there are many mirrorless cameras and many of them have interchangeable lenses. But the longer lenses start to make these cameras somewhat bigger, longer, heavier than the Fuji X100s.

When the gap between mirrorless and dSLRs narrows, you have to ask whether a few more ounces of weight matters that much.

With modern cameras with 24MP or even 50MP sensors, photographers can crop more than they used to be able to, but there is still a limit to how much they can crop.

But what if you didn’t have to go down this route at all? What if you could use one camera with one short focal length fixed length lens and do everything you wanted?

There is a solution and that is for the technology to catch up and give us more pixels. Not just 50MP, but 1,000MP sensors with great image quality in a small package. Then you can put one fixed 50mm-equivalent lens on the camera, confident you can crop as small a part of the image as you need.

And short focal length lenses don’t stick out far from the camera, which makes the whole package even smaller and more attractive than those big telephoto lenses that stick out twelve or fifteen inches.

The reason a 1,000MP camera would work is that there is one constant in all of this.

The one fixed factor in all of this is we humans – us.

What we do need is small cameras with a short focal length lens and a gazillion pixels so we can crop down and use a tiny portion of the captured image, and still have something that is eminently useable to print.

Find a solution and you find a problem.

It’s another ‘impossible’ task just like the cameras and computers and applications of today were ‘impossible’ just a few short years ago.

To give you an example, Google has been working on a new file type to replace JPEGs. The files are better quality with smaller file sizes.

I didn’t say the solution would be easy to find, but there again, I recall a computer Tamara and I had in the year 2000 that had a 6GB hard drive. It’s funny because the RAM on my current computer is 16GB and there are SD cards for cameras that are 64GB. The world moves on.