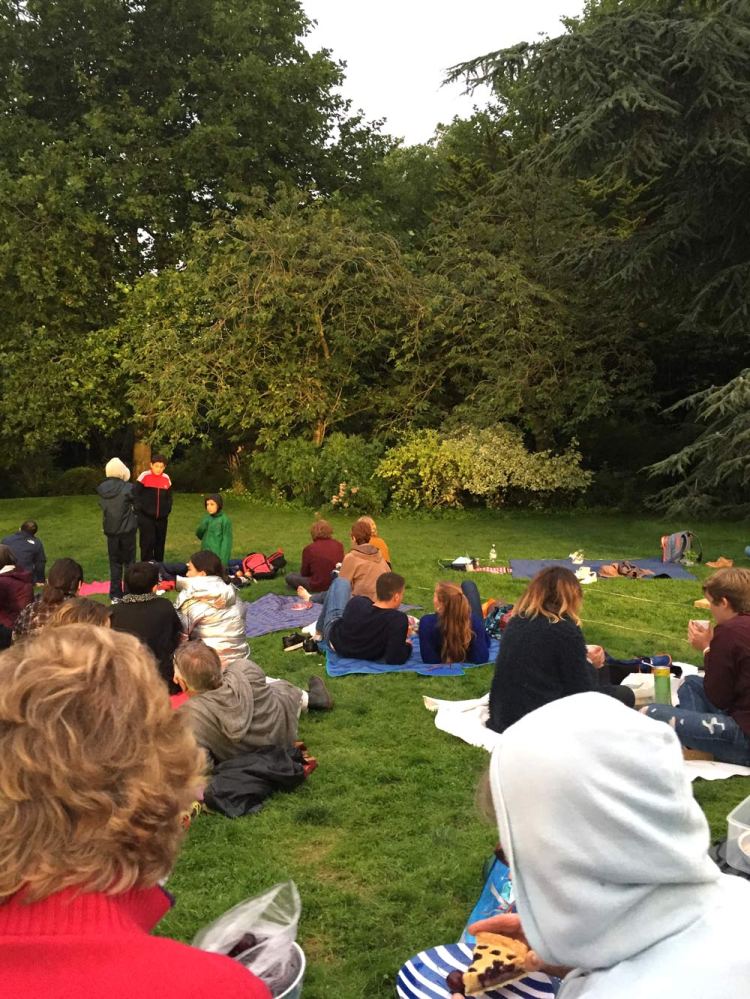 I took this photograph with my iPhone. The timestamp is 8:28pm when the light levels were already low and it was twilight – that time of when it is no longer day and not yet night.

The photo is of what I could see in front of me from my seat during the interval of an open-air production of A Midsummer’s Night Dream.

The play was part of the Cambridge Shakespeare Festival and the stage was the garden of Trinity College. The area my camera/phone is pointing to part of the area where the players played. In other words, the stage – a grassed area flanked by bushes and trees.

The people immediately in front of me are sitting on chairs, and then beyond them are the people who watched the performance from the grass – sitting on picnic blankets to guard against the damp.

Because the light was low, there were lights on stands behind us pointing towards the stage area.

And that is why the photo looks so well lit. How well the people directly in front of me are framed. If I were to move around to the side of them I would see how quickly the light stopped and the shadows began. And that is what causes them to look so well framed and well lit. The dark around them frames their shapes.

That’s kind of what I did today, when we came out of the station in Cambridge and I saw this building illuminated by the light in the sky slanting across the scene. Yes, it is earlier, not twilight yet, but the beginning of the demarcation between light and dark.

Again, shot with my phone.

If I had any sense I would shoot at twilight and taken advantage of whatever fading sunlight illuminates the scene. And if I really wanted to go to town, I would use lights to illuminate the scene and set it up like Gregory Crewdson does.

Gregory Crewdson at The Photographer’s Gallery

There is an exhibition of the work of Gregory Crewdson in London at the moment. His work under the title ‘Cathedral of the Pines’ is on at The Photographer’s Gallery and I hope to get to see it.

You may be familiar with his work. Google his name and you will see lots of images.
Let me quote from an article by his wife, Juliane Hiam.

Each photograph took two days to shoot. On the first day, the subjects learn what they’ll be doing and where they’ll be standing, and the shot is lit. Gregory only shoots at twilight, so the following day, there’s a lot of waiting around, a build-up of anticipation, then a brief, intense period of activity. Exterior shots are bigger operations: the Becket fire department would do a “wet down”, where you hose down a street to make it look as if it’s been raining – a common movie technique.

See? He shoots at twilight and lights the scene.

You can get the idea from this photo of how he lights scenes with a disturbing colour.