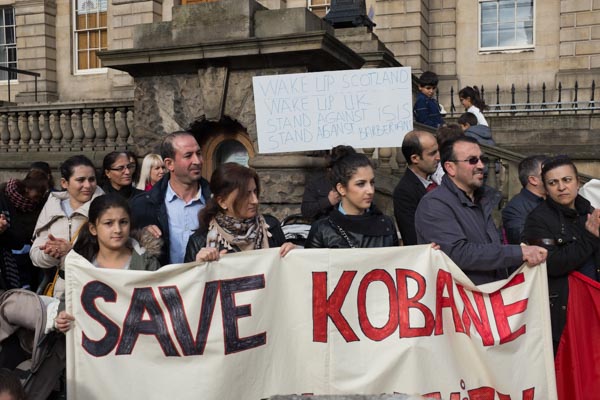 About fifty Kurds staged a protest in Edinburgh today to protest threat to Kobane by ISIS.

They were also there to protest what they see as the complicity of Turkey in allowing the siege of Kobane to continue unopposed.

Kobane is in Syria, just a short distance from the Turkish border. People on the border can see the plumes of smoke and the explosions in the city.

The European Commission has been notable this week for pushing for Turkey’s early accession to the European Union.

This is in contrast to the EU complaining over the past five years about human rights abuses in Turkey and how this stands as a barrier to Turkey’s proposed EU entry.

Meanwhile the UN says that there is likely to be a massacre in Kobane if it falls to ISIS.

For years Turkey has been fighting Kurdish demands for a separate state of Kurdistan.

There are Kurds in Turkey, Syria, and in Iraq – and the argument is that Turkey is standing by so that ISIS will destroy the Kurds in Syria and thereby lessen the homegrown movement for Kurdish independence in Turkey.

If this is the case, then I would think that this would simply inflame Kurdish demands for independence.

As you can see here, there are placards that accuse Turkey of complicity with ISIS. 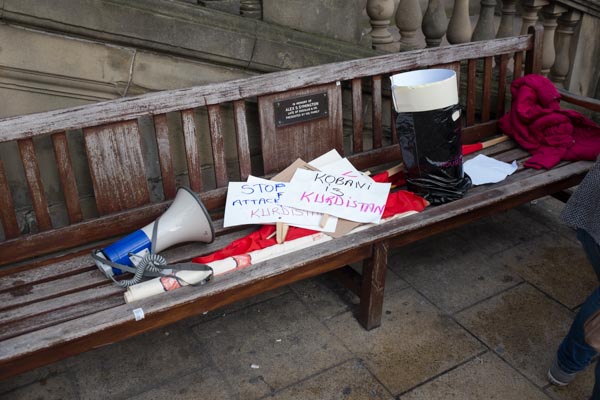