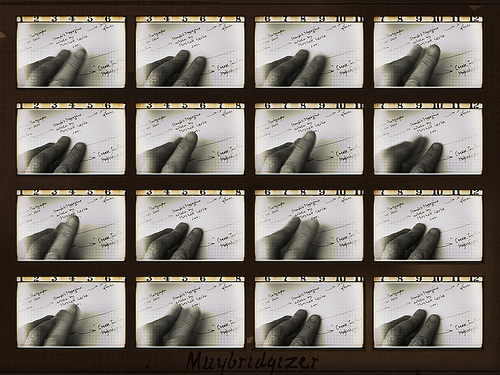 An addendum to an article in Theonlinephotographer pointed to a 2001 article by Mitchell Leslie in Standford Magazine.

This in turn pointed to a July 2010 update that referred to an exhibition of Muybridge’s work that was to be at Tate Britain from September 8 – January 16, 2011.

The Tate Britain site said “Create Your Own Muybridgized Images” and pointed to an iPhone app.

The trail from TheOnlinePhotographer to the iPhone App interested me and I had scribbled it down.

So the first stop-motion set I created with the Muybridgizer is this one of my fingers drumming on the sheet of paper.

The sheet of paper shows the breadcrumb trail of how I came to be there drumming my fingers.

It’s a pity that the sequence cannot be show as a video. Still – it looks good on the iPhone. You just take the sequence (it’s all pre-set) and when it is saved, you just sweep your fingers across the screen and the images flicker past.

This sequence can also be seen in the Flickr Muybridgizer group pool.

I hope to see the exhibition at Tate Britain.

And I hope to take some more images and put them up here.