Nikon builds vibration reduction into some of its lenses, as does Canon. Not all Nikon’s lenses have vibration reduction and for very short focal length lenses it is not necessary. Vibration reduction, or image stabilization as some other manufacturers call it, stabilizes the camera. It does not stop the subject moving so it is no advantage in sports photography where very fast speeds are required. But it is useful in low light.

In the Nikon Imaging site, a Mr Kazutoshi talks about the development in vibration reduction technology in Nikon lenses. He says that VRII, the second generation incarnation of this technology means that:

The detection of the low frequency band in camera shaking has been greatly expanded, so the VR effect has become available even if the shutter speed is quite slow. I believe that a VR effectiveness equivalent to about four stops in shutter speed covers most shooting conditions. When we were test shooting during development, we couldn’t assess the effectiveness of four stops in shutter speed until well after the sunset, so we had to shoot through the night for some time.

For those not familiar with what four stops in shutter speed means, cameras are designed so that there is a constant relationship between the aperature and shutter speed. Each stop opening up the aperture, doubles the light that gets into the camera during the shot. And shutter speeds double in the same way, so that it is meaningful to measure an increase in one stop of light by saying it is equivalent to a doubling of the time the shutter remains open.

So translating this into what we can acheive with Vibration Reduction on a Nikon lens, let’s suppose I am shooting a lens with a focal length of 135mm and that I using a camera with a crop factor of 1.5, (which means all of Nikons DSLRs with the exception of the new D3, which is full frame).

So the 135mm lens has a field of view equivalent to a 200mm lens (more or less) in a full frame 35mm film camera, which is the standard that focal lengths for lenses are described against.

Some lenses that have VRII and are well regarded, are the following: 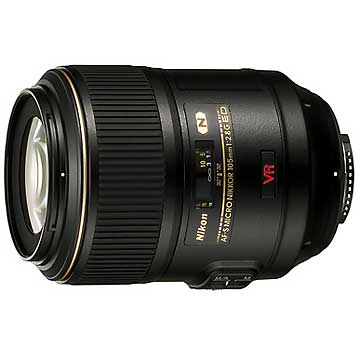 As I said, aperture and shutter speed are constantly related, so the more light a lens can let in, the faster shutter speed the photographer can use for a given amount of available light.

Of course, the lenses do not all cover the same focal length range, so there may be other very good reasons to choose one of the other lenses, but all things being equal, a lens with a larger maximum aperture has an advantage in low light.

And for longer focal length lenses with subjects that are not too near the camera, the fact that the photo is taken with a wide open lens is less of a problem in terms of focusing, than it would be if the subject was close to the camera.

The reason that there is a problem at all with focusing errors with wide open lenses compare to stopped-down lenses is that the larger the aperture the smaller the depth of field. Which means that there is a smaller zone from front to back that is in focus.

And that zone may be just a few inches – the distance from the point of someone’s nose to the edge of their ear in a frontal shot. So a focus error could mean the ear is in focus but the eyes are not.

But whatever the errors, they diminish as the distance from the camera to the subject increases. So that for a longish lens with a wide aperture taking a shot of someone who is not too close to the camera, the risk of missed focus diminishes.

There are several depth of field calculators online and I am using http://www.dofmaster.com/dofjs.html, which is at this link HERE

I have used it to find out the depth of field with a 105mm lens at f2.8 at various distances.

At a camera to subject distance of 10 feet the depth of field is four and a half inches. Not much is it.

The metric equivalents are

The fact though is that some lenses are sharper than others when shot wide open. That is a function of the lens design, and in turn that is a function of money. Expensive lenses are expensive for a reason. The 70-200mm lens is regarded as a revelation in terms of what it can achieve. It costs $1,600, compared to the 18-200mm, which is $750.

Of course, a 200mm lens can reach a long way, but it is not always desirable, and 200mm can be too much in a cramped situation.