The image in the thumbnail is a crop from an image that was prduced using displacement maps in photoshop.

Click on the image for a larger view. The original image I have posted is 900 pixels wide (it’s still a small file though), so it won’t fit on this page except as a thumbnail, so click to see it bigger.

I learned about displacement maps as a method of blending a type layer so that it appears to follow the contours of a background layer – so, for example, one could make a slogan appear to follow the folds of a T-shirt.

But displacement maps can be used with any two images.

Both images should be PSDs and 8 bit.

The displacement map image can be any image in 8bit PSD on your drive, but I have found that using another version of the original image you are working with, can work well. So open Fred, increase the brightness and contrast; desaturate it, play about with the hues or desaturate it, and save it with some convenient name – maybe James?

James doesn’t have to be open while you use this technique.

A box appears and asks you for values. You can put positive or negative values in the boxes, such as -30 in the top box and 21 in the lower box. It is up to you. I used to use small values of 5 or so, but I tend to use bigger values now. A lot depends on the image. Images with a lot of small detail (leaves on a tree for example) might suit one set of values, whereas a face might suit a different set).

Click OK and you are asked to choose a displacement image. Choose James.

You can repeat the process. You can use the same or different values, or you can use a different displacement map image.

And you can of course intersperse each repeat using other filters such as the artistic, sketch or liquify filters.

Important
If you like the result, don’t just save it or you will have overwritten Fred. Save it with a different name (Arthur, perhaps?).

The processor in a digital camera can reveal or change the appearance of the information coming into the camera and we may notice it or not.

The processor may alter the distribution of darker and lighter areas, taking out some of the subtleties. And we may see this alteration as making the image look artifical or unnatural.

If it is a good camera it may show all these subtleties of tone, and do so in a way that film camera technology struggled to do.

Lighting
And using a flashlight and a mirror it is very easy to appreciate what is going on. Standing in front of a mirror in a darkened room and playing the beam from a flashlight on your face, we can notice how very small changes in the angle at which the light hits the face can make it appear narrower or broader, and can make features appear more or less pronounced.

Every woman who makes herself knows how lighting affects the appearance of things, and of course studio portrait photographers use lighting to build a ‘light picture’ that best suits the subject. Lighting for film and television is an art form of building the preferred image with light.

Altering information
But the image processors in some cameras do more than just block up tones. They actually change the details of the subject I recall, some years ago, seeing crops at 100% of images from a digital SLR, where the camera had produced an image that did not reflect the subject.

The processing engine in the camera had ‘moved’ darker and lighter areas around in the small details, and effectively altered the subject. An eyebrow appeared turned up at the edge, when it did not do so in the person being photographed.

Digital technology has come a long way in the past few years in producing images that are both more film-ic and natural looking, and which accurately reflect the subject.

Which is not to say that it is only the current crop of cameras that can deal with subtlety in tonal distibution. This is a crop from a studio shot taken several years ago with a Nikon D70 , which under good lighting, could produce good tonal subtlety.

What is good lighting?
There is no doubt that current cameras can handle poor lighting conditions better than earlier models, whether it is bright and contrasty light or low light with deep shadows. But ‘handling’ poor light and using the best light are not the same thing and do not give equal results.

The essence of studio lighting is that it controls the brightness range, and the photographer makes sure the range from the lightest to the darkest areas is within the capability of the camera’s processor.

That restricted tonal range applies to daylight shots as well, which is why light but overcast days are better for photography than harsh sunlight.

Lighting is described as specular or diffuse.

Overcast days means the lighting is bounced of the clouds and diffused over the sky.

With diffuse lighting the range from the brightest to the darkest areas is small. In full, bright sun, where there are harsh shadows and burned-out highlights, the range may be too great for the camera, and importantly, even if it is not, the tones have to be compressed, making for a less pleasant image.

Many nature photographers put their gear in the cupboard throughout the summer season. Most shoot early in the morning or late in the afternoon to avoid the harsh unflattering overhead sun.

Portrait photographers shooting outdoors use reflectors, overhead diffusers, and fill-flash to even up the lighting and reduce the overall contrast range.

Overhead diffusers may seem an impossibility, bearing in mind how big the sky is, but take a look at some of the products from California Sunbounce. 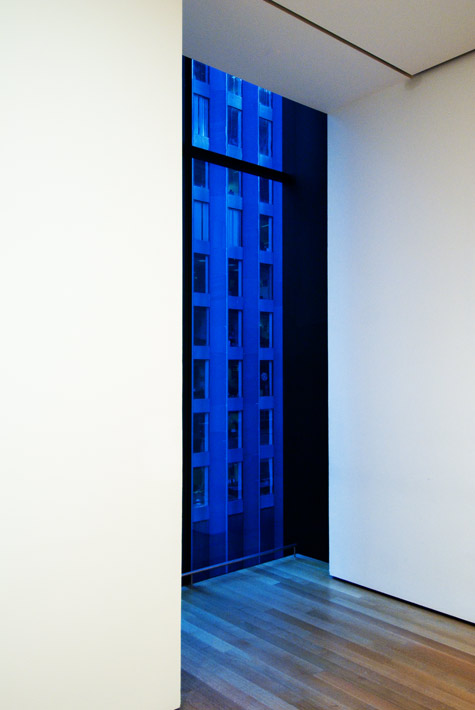 Woman appearing to be praying before the Richard Serra sculpture in the garden at MOMA. Or she could be – in fact is – looking at the shot she had just taken with her camera. The surface of the huge iron sculpture is pitted with rust.

There are more of his sculptures in the building and some are so big I had to ask how they got them in there. The answer is that the wall rolls back and a crane hoists them in.

MOMA, the Museum of Modern Art in New York, is a beautiful building and it that grabs the light streaming in and diffuses it wonderfully.

My wife found this little guy in a pail in our third floor apartment in Jerusalem. He is an Mediterranean Gecko. Geckos (I have to ask myself whether I am completely sure of the plural of Gecko) have the ability to climb surfaces without the use of any adhesive secretions or liquids on their feet. Rather they use the elecromagnetic attraction that exists between molecules.

I took this at 1/50second at f5.6 at ISO 800 with a Nikon D40 with the 18-55mm kit lens, held with my free hand while the gecko showed me his better side. The make-up artist was away, so we had to shoot without makeup.

Technically, it illustrates that at very short subject-to-camera distances, the depth of field is very small. The gecko’s face is probably in focus. It is hard to tell because he was moving and any lack of sharpness may be doing to subject movement, but he is not far off being as sharp as my knuckle. But everything back from that is falling rapidly out of focus.

If I has shot him with a long lens at a greater distance but with the same focal length, more of him/her would be in focus. 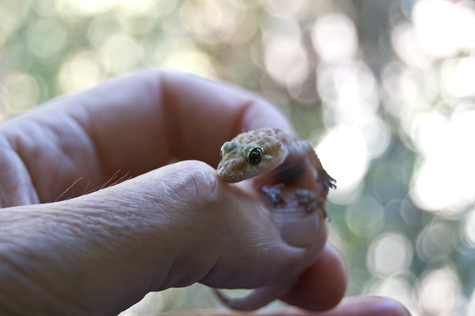 No geckos were harmed in the making of this shot.

And here is a thumnail of a larger version of the shot, Click it to see the larger view.

The level of detail in the camera held in the woman’s hand is amazing. This is especially so considering the shot was taken hand-held in poor lighting. 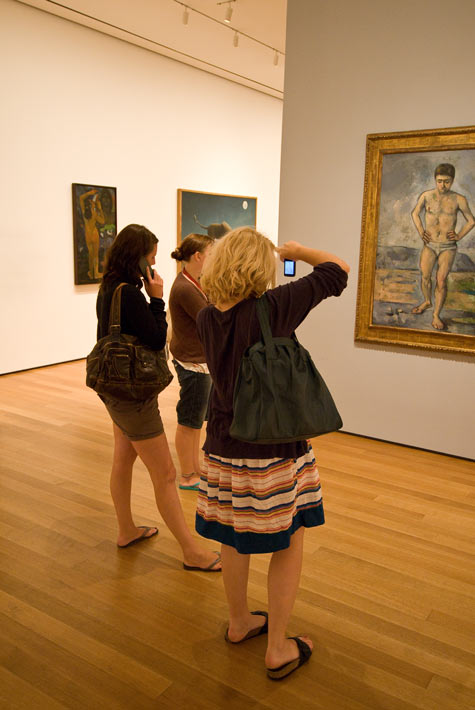 Crop showing the camera in the woman’s hands.