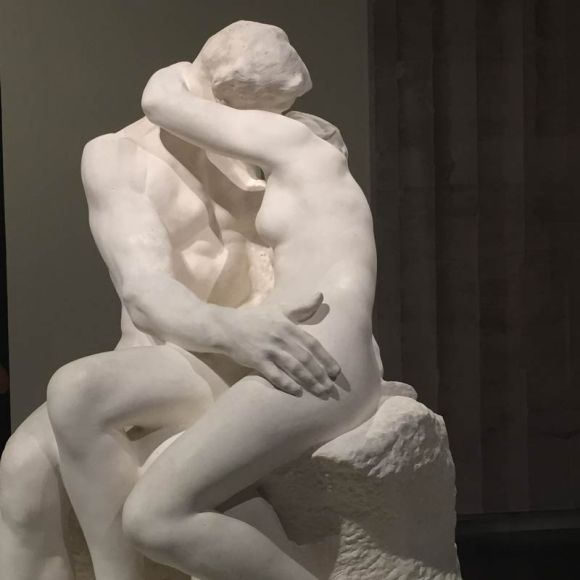 His ‘The Thinker’ and ‘The Kiss’ were there.

In my mind’s eye I already had an image of how the couple in The Kiss were entwined and melted into one another, and here in the photo above is the couple, seen from the front.

The Front and The Side

I know there isn’t a ‘front’ and a ‘side’, exactly, on a sculpture that is by its nature something that can be seen all the way around.

But I think that is more or less the ‘front’ – the position from which the two are seen most entwined, having a good old smooch.

But come around the side and surprise! The man is sitting upright, straight backed.

It’s always interesting to walk around the back of sculptures! It takes some extra effort, for those of us who tend to be lazy art lookers. But you never know what you’ll see!

I feel at home looking at sculptures – like I do when I am looking at the draughtsmanship of a drawn figure and can see whether it is right or not. When the head is in the right place, the shoulders just exactly right, the neck, the hands – it gives me a terrific thrill.

I’m so used to seeing sculptures – my mother was one – that I am not surprised by the other view and saw his back as straight in the ‘front’ view. But I’m interested that you saw it differently. 🙂

I imputed into him that he would lean into her – partly because the description talks about them melting into one another. Also because I imagined it more egalitarian 😊

I am aware that my observation says something about me. 😊

Sorry.. that should have read ‘my mother was a sculptor’ … (obviously it’s a day for typos. Or maybe just time I had some food…)