You can read about it here, which is a link to the US Patent Office patent application – Patent Publication

I don’t know why the US Patents Office page (as you can see by following the link) refers to ‘United States Patent Application: 0180065749’ because the patent application number is in fact 15/697106

Here is the application in PDF form

On December 6, 2017, Walmart announced that it will change its corporate name to Walmart Inc. from Wal-Mart Stores Inc. effective February 1, 2018

I guess Walmart is in a fight for survival against Amazon, and had to file for something like this. It is easy to see that Amazon’s drone delivery system could easily be turned into a pollination armada, which would help Amazon pay for the cost of the drones or give them a huge income stream.

How I Got To Hear About The Wal-Mart Patent Application

Some years ago I set up an alert for ‘colony collapse disorder’ with Google, and I get regular alerts. This is the alert I got today. 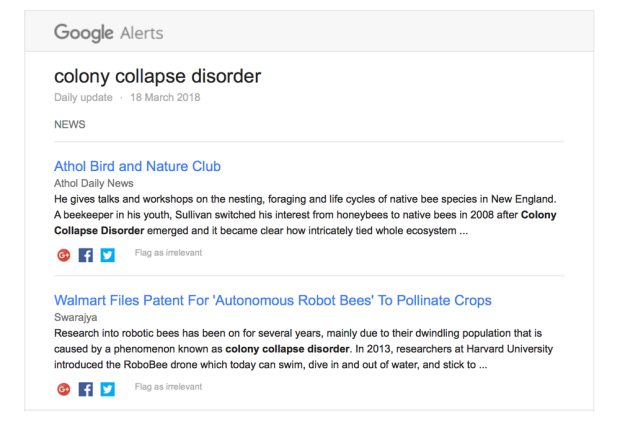