I’ve just written an article on the Quillcards blog comparing the Nikon D5100 with the Nikon D7000, principally comparing the ease (or not) of seeing the active focus point in the viewfinder.

The image quality of both cameras is very good – and I have put a shot and a crop from it in the article to show what I mean.

I took the D5100 on a trip to the United States recently, but for a trip to London a few days ago I decided to take the Panasonic GF1 with 20mm lens, which makes a very small package.

It’s not small enough to slip into a pocket (unless it is a very big pocket), but it is very light.

But what of its image quality?

Well it has a larger sensor than on a typical point-and-shoot, so the image quality can be very good – as I think this shot and the crop from it show this well. 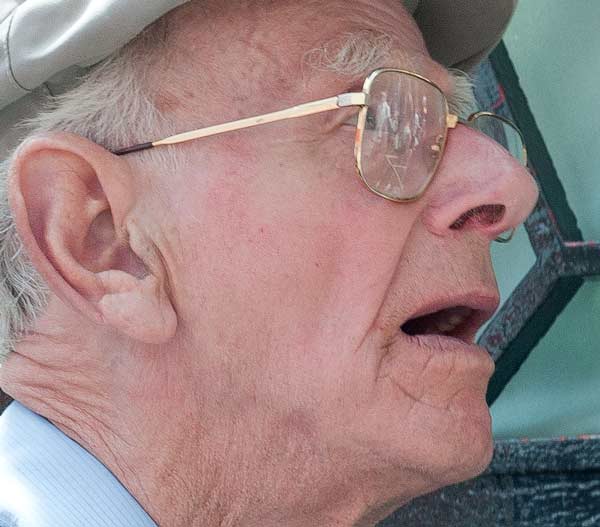 What do you think of the image quality?

There is no built-in viewfinder on the GF1, but Panasonic make an auxiliary electronic viewfinder that you can slip onto the hot-shoe. I don’t have one, but I periodically think about getting one. Watch this space for reports on it – as and when I pay the not inconsiderable sum that Panasonic charge for them.

The thing is that I took this shot – of the man in conversation – as I was walking through Covent Garden outdoor market. I had the camera in my hand and I shot from the waist – just judging the focus point by ‘guessimation’.

Here is another shot – of a street that runs between the Victoria and Albert Museum and the Natural History Museum in London. The light was very contrasty, so this is a good test of how well the camera can hold highlights and shadows.

One final point about the GF1 is that it is easy to change the aspect ratio. You can see that the full frame of the shot of the man and of this street scene is a long ‘letterbox’ shape. The aspect ratio is 16:9, and the Panasonic has settings for this as well as for 1:1, 4:3, and 3:2.

For the low-down on aspect ratios, check out this article: The Lowdown On Photographs And Aspect Ratios.

It is very pleasant to switch from one to the other to get the ‘look’ that one wants for a particular shot.